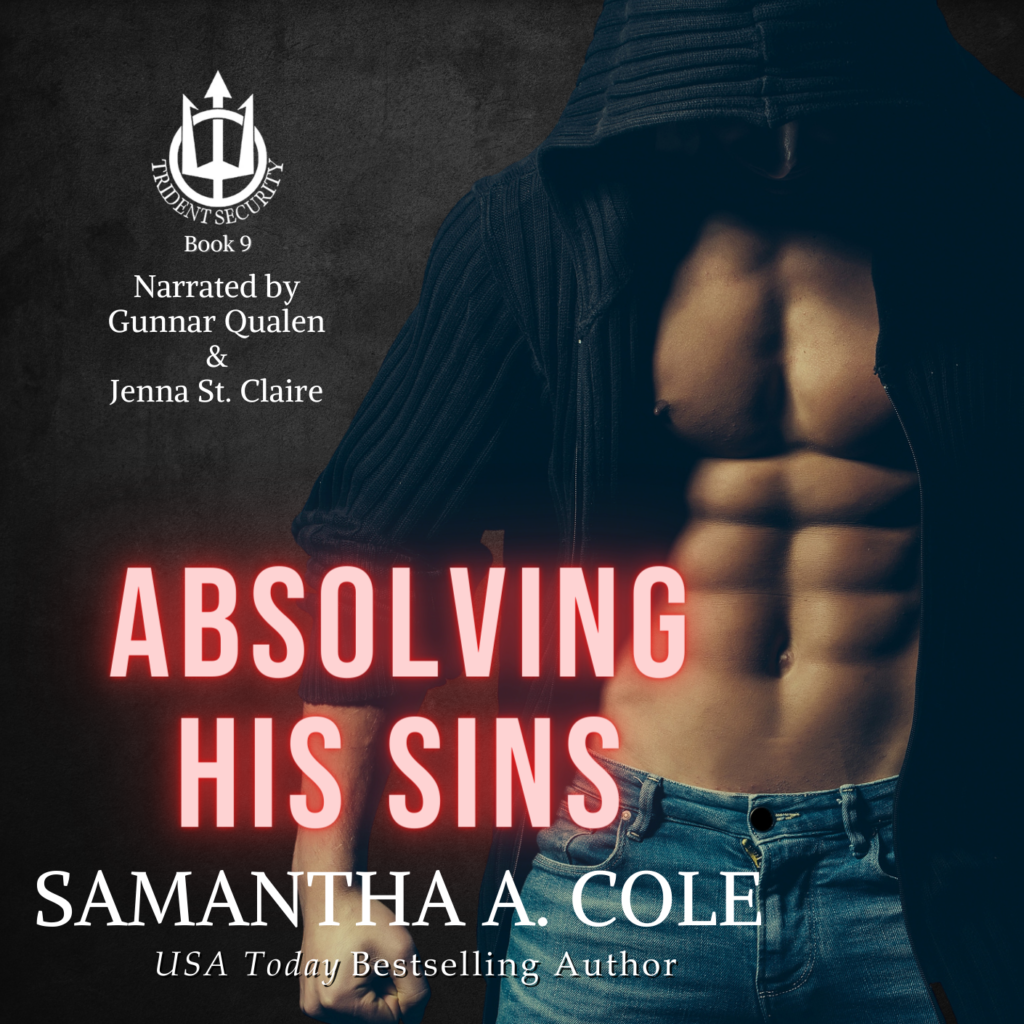 The book Trident Security fans have been waiting for!

The huntress has become the hunted, in more ways than one. Jordyn Alvarez works for the United States government—a fact no one in authority will admit. She does Uncle Sam’s dirty work. Some might call her an agent, but few know her real title—Assassin.

Trained by one of the best black operatives in the world, she wants nothing more than to add him to the long list of people she has sent straight to hell. But she doesn’t dare get close to him ever again. If she did, she couldn’t be sure her body wouldn’t betray her once more and wind up in bed with him. But with her cover blown, she may not have a choice.

Who is he? He’s a ghost. A man with one name—Carter.

“What the fuck are you doing here?”

Smirking, T. Carter stared down the barrel of the gun, not the least bit worried it would be fired. He was lounging on the queen-sized bed in Jordyn’s hotel room, with his back against a pillow, feet crossed, and arms resting behind his head, as his gaze trailed up and down her body. Damn, that woman is fine. Every muscle was toned to perfection, yet there was no mistaking her womanly curves. Curves he’d enjoyed only once before.

He’d been anticipating and worrying about her return for close to an hour. Not knowing where she’d planned to take out her target, he’d been resigned to wait for her here in her hotel room, and it had nearly killed him. The relief he’d felt when Ian Sawyer had reported spotting her at the café across the street had been palpable. She’d stayed there for a half hour, eyeing the hotel and its surroundings for anything or anyone out of place. The fact that she hadn’t spotted Ian or any of his men didn’t mean Jordyn wasn’t alert, it just meant the covert team was that good. Now that Carter had his eyes on her, he was able to relax even more despite the threat that still loomed out there somewhere.

When he’d gotten the phone call from his bosses at Deimos that all hell was breaking loose, he’d immediately contacted Ian and his brother Devon, the owners of Trident Security, who he trusted with his life—and Jordyn’s. Until a few hours ago, the men hadn’t known which alphabet agency Carter had worked for—all they knew was he was a black ops spy and assassin for the United States. But to get to Jordyn before she ended up dead, he’d called on the best team he knew for backup.

He hadn’t been surprised when she entered with her weapon drawn. As he’d picked the lock to get in, he’d noticed a nearly invisible piece of tape she’d placed between the top of the door and the molding. It was one of numerous tricks he’d taught her. She would’ve checked to see if it had been moved before entering, unsure if it was an intruder or the maid service.

“I asked you a question.” Glowering at him, Jordyn lowered the gun, but didn’t re-holster it. “What the hell are you doing here, Carter? And how the hell did you find me?”

His grin grew at her attitude. She was a feisty little thing, and damn, he loved feisty. “Easy, love. I trained you, remember?” He sure as hell did. Eight years ago, the lovely Ms. Jordyn had been recruited for Deimos after the international jewel thief had interrupted one of their missions on US soil. The powers that be saw the raw potential in her and gave her an option—go to prison or work for the government. Wisely, she’d taken Door #2.

From the moment Carter had laid eyes on his new apprentice, he’d craved her. But professionalism, integrity, and patriotism outranked his desire and lust. For months he’d trained her—twelve to fourteen hour days, seven days a week, with only occasional downtime. It was those times he’d enjoyed the most, when she let down her hair and relaxed. More than once the electricity in the air had crackled between them, but neither had made a move. He’d lost count how many fucking cold showers he’d taken during that time.

Once she’d excelled in weaponry, hand-to-hand combat, logistics, how to kill a man in numerous ways, and everything else she’d needed to learn, she’d been turned loose. After that, Carter had been teamed with her several times. It was during one of those missions he’d let his desire take over and—

“Don’t remind me,” she spat, interrupting his thoughts. “And I’m not your fucking ‘love.’ Now answer my other fucking question, dammit.”

He shook his head and frowned in feigned annoyance, when, in fact, he was utterly turned on. “Tsk, tsk. Such a dirty mouth.” He stared at that mouth, remembering what it felt like under his. His cock twitched at the thought. Down boy. “I’m here to extract you. Your cover’s been blown.”

His gaze roamed her body, and his hands itched to follow. “I’ll explain later, but we need to get somewhere safer.”

“I’m not going anywhere with you.” Still not relinquishing her weapon, or the duffel bag he knew held her sniper rifle, she cocked her hip as she glared at him. And, damn it, that just had his dick twitching again. If he didn’t get her moving soon, he’d be hard as a fucking rock with no relief in sight.

He was about to tell her that yes, indeed, she was coming with him, whether she liked it or not, but paused, listening to the comm set in his ear as Ian’s voice came over the airwaves. “We’ve got company, dude. Three guys packing, and it looks like they’re on a mission. Getting on elevator. You’ve got less than thirty. Meet you out back.”

Time to go. He tapped his comm set once to let the other man know the message was received. Grabbing his gun from where it sat within reach on the bed, Carter leaped up and strode past a gaping Jordyn on the way to the door. “If you don’t want to go with me, love, then fine. You can deal with the hit squad on their way up here right now with orders to kill you.”

“What?” she hissed, following him out the door leaving behind the few things she had left in the room. He knew everything she needed was somewhere on her body or in the duffel bag—everything else could be replaced.

He glanced over his shoulder, but kept moving at a fast, yet silent, pace down the hall. “Changed your mind?”

Her growled, unintelligible response caused the corners of his mouth to tick up in a smile.

They were almost at one end of the hall when the elevator dinged at the other end of the long expanse, and the doors began to open. Shit! Two steps away from the closed door to the stairs and they were spotted. Ignoring the shouts to stop, he burst through the door with Jordyn on his heels as gunfire exploded behind them. Splinters flew from the door jamb, narrowly missing them, and Carter pushed Jordyn in front of him as they ran down the stairs. They were two levels down, with one more to go, when the gunmen slammed the door above them open. More shouts and gunfire echoed through the stairwell. Stupid fucks. Not that he minded, but these guys were idiots. He and Jordyn were skirting the walls on their way down, staying out of sight, so those jackasses were just shooting for the hell of it. Hm. Somebody didn’t want to pay for an experienced hit squad or didn’t care how much attention they attracted in the process.

The two spies hit the ground floor, and Jordyn ripped open the door leading to a hallway. She was about to go left, when Carter grabbed her arm and pulled her to the right. “This way, love. Our chariot awaits.”

He hurried through a set of swinging doors, into the laundry room, where the workers barely looked at them, and out onto the loading dock. Jumping off the dock, he still had Jordyn by the arm. A black SUV with smoked out windows screamed to a stop in front of them. The rear passenger door flew open, and Carter pushed Jordyn into the back seat, jumping in behind her. The vehicle took off again before the door was even shut. The whole episode from the room to there had taken less than two minutes, and neither of them had fired a shot.

Leaving the hit squad far behind, Ian made three quick turns on the streets of Kano. When he slowed down to a normal speed for the day’s traffic, which was still close to neck-breaking, Jordyn put the duffel by her feet, shifted to face Carter, and glared at him. “Okay, Tristan, tell me who the hell they were and why they’re after me.”

Carter hooted loudly as Jordyn glanced at the man in the front passenger seat who was staring back at her with narrowed, wary eyes. “What are you talking about?”

“And it’s not mine,” Carter added, still chuckling. “Sorry, McCabe. Every time the beautiful Jordyn sees me, she tries to guess my given first name. In seven years, she still hasn’t gotten it—not that I’d ever admit it if she did.”

A car pulled out in front of Ian and he jerked the steering wheel sharply to avoid a collision. The sudden movement sent Jordyn flying across the seat into Carter’s arms and practically in his lap. He grinned at his female counterpart. “Well, hello, love. And here I thought you didn’t miss me.”

Damn, her body felt amazing pressed against his, but it didn’t last for long as she struggled to sit upright, her hand barely missing his groin, before shifting over to the other side of the vehicle again. If looks could kill, he’d be on his way to the morgue by now.

She growled at him again, but this time, he understood what she said. “I didn’t miss you, asshole.”

Jordyn’s head whipped toward the front seat, and she glared daggers at the back of the driver’s head. And, yup, Ian should be on his way to the autopsy suite as well. “Fuck you!”

“Sorry, sweetheart, I wasn’t calling you a jackass,” Ian explained as he steered them toward the on-ramp of the highway leading to the airport. Fifteen more minutes and they’d be taxiing down the runway. “It’s a long-standing joke. Carter’s the jackass, and our computer geek, Brody, is the asshole. That leaves my dear brother to be asshat.”

“So, what does that make you—asswipe?”

“Ha!” Ian barked as he slapped his hand on the steering wheel. “You were right, man, she does have grit. I think I might like her.”

Carter eyed Jordyn smugly while she looked like she wanted to slice him six ways to Sunday. It was a good thing he’d been the one to train her, otherwise he might be in trouble. As it was, she’d hated his guts ever since they’d had a romp in the sack. And what a romp it’d been. The woman could kill a man in dozens of ways, yet in bed, she was submissive. Little Ms. Jordyn, assassin extraordinaire, was the hottest woman he’d ever enjoyed pleasuring. Until the next morning when he’d woken to find her gone.