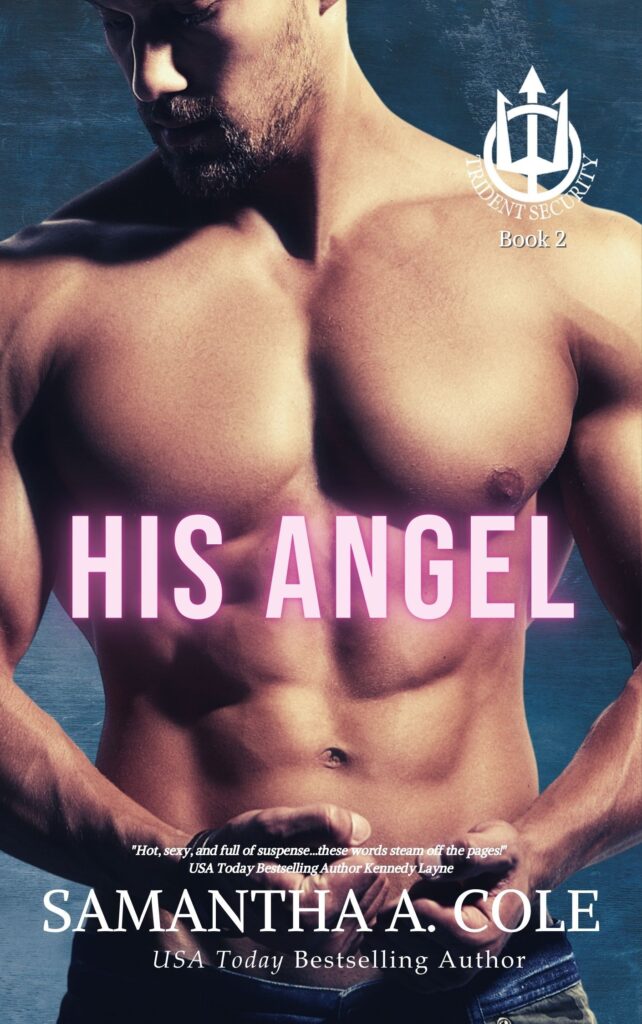 ***The books of the Trident Security series and its spin-off series can be read as standalones, however, for optimum enjoyment they are best read in order.

Ian counted off the one-hundred and eighty seconds in his head. In the meantime, he removed the diamond cuff links from his wrists, placed them in his jacket pocket, and rolled up his sleeves to his elbows. He took another drink from his bottled water then put it back on its coaster. His erection was aching in his pants, and he tried to ignore it. He would take care of it later on his own. When he told her there would be no intercourse tonight, he’d meant it. Tonight wasn’t about his own release. It was about introducing his angel to the power exchange between a Dom and a submissive.

One-seventy-eight. One-seventy-nine. One-eighty. Ready or not, Angel, here I come.

She had left the bedroom door ajar, so it only took a slight nudge to open it all the way. His breath caught and the aching in his groin increased ten-fold. He hadn’t thought she could look more beautiful than when she’d answered his knock at her front door earlier in the evening. He was wrong.

Striding to the end of her bed, he took in the sensual sight before him. Her hair was still up in its bun, or whatever the hell women called it, and her head and upper shoulders rested against two plush pillows. Ivory-colored skin covered every inch of her, and she had no tan lines, which didn’t surprise him since it’d been a colder-than-usual February and March. He wondered if she would wear a one-piece or bikini bathing suit when the warmer weather returned and couldn’t wait to find out. Most Doms preferred their subs to be naked under their clothing, but not Ian. He liked a woman in sexy clothing and even sexier underwear. He had a fetish for lacy bras, panties, and lingerie, finding women tended to feel more beautiful when wearing them—and naughtier.

Her modesty had kicked in at some point while she was waiting for him. Her hands each covered a large breast and one knee was bent, leaning over the opposite thigh so her pussy was hidden from his view. The uncertain pose turned him on more than if she was completely exposed to him, but he was dying to see all of her. Glancing above her head, he was happy to see the headboard was wrought iron with intricate scroll work and gaps large enough for her hands to go through. It would give her something to hold on to. His gaze ran from her head to her toes and back up to her anxious, but heated eyes. From the light coming in through the open doorway, he watched her pupils dilate with desire. Her tongue sneaked out of her mouth, wetting her lips, now devoid of lipstick, and he groaned. His little angel was going to be the death of him before the night was over.

“You’re the most beautiful woman I’ve ever seen.” He loved how her blush deepened with his words. “But I’m going to show you how to feel that beauty. If at any time you get scared or unsure I want you to say the word ‘yellow.’ If you absolutely can’t take something, say the word ‘red’. But be warned, sweetheart—if you say the word red, everything stops for the night. We’ll discuss your fears, then I’ll go home, and we’ll try something else next time. Understand?”

She silently nodded her head, and he frowned at her. Realizing her mistake, she corrected it. “Yes, I understand. ‘Yellow’ for scared, ‘red’ for stop everything.”

“Good girl. When we are playing, you are to refer to me as ‘Sir.’ Now, we’re not at the trust level where I could restrain you so I’m going to have you restrain yourself. Move slowly and bring your hands above your head. Grab hold of the headboard and make sure you’re comfortable because you’re going to keep them there for me.” He held his breath as her hands left her luscious breasts and inched upward, skimming over her collarbones and shoulders, past her head before they grasped two thin pieces of iron. He’d been right about her nipples—they were pink and aroused and made his mouth water.

Walking around to the side of the bed, he toed off his dress shoes before sitting down on the mattress next to her in the area between her chest and hips. He placed one hand on the comforter on the opposite side of her, using it to support some of his weight, and studied her from the breasts up, touching her only with his gaze. “Tell me, Angel, when you’re alone in this big bed, how do you pleasure yourself?”

“Where do you keep your toys, sweetheart?”