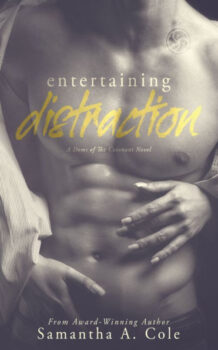 Come meet the Doms of The Covenant and the submissives who bring them to their knees.

The last woman Mike Donovan ever expected to be attracted to is one who wants to dominate him.

Having her childhood ripped away in the blink of an eye, Charlotte has kept the different facets of her adult life separate from the others. A parole officer, a homebody, and a Domme are the three personae the rest of the world might see, but rarely at the same time. However, her attraction to Mike merges them in a way she never thought possible.

Can each learn to compromise in order to make a relationship between them work? And when circumstances put both of them and their friends in danger, will everyone survive?

**The books of the Trident Security series and its spinoffs can be read as standalones, however, for optimum enjoyment they are best read in order.

As the evening wore on, Charlotte relaxed more and was finally able to enjoy the fact she’d turned another year older. The conversations in the room were also growing louder and raunchier as the alcohol flowed. The sound of the women roaring with laughter drew the attention of a few people in the main bar. And, of course, a couple of swaggering jackasses had to poke their heads into the party room. Three barely-out-of-college-aged men strolled in after eyeballing the room full of women dressed to the nines. Charlotte rolled her eyes. Here it comes.

“Hey, sexy ladies, mind if we join you?”

The laughter died down as Charlotte stood. In stocking feet she was five foot three, but in her four-inch heels, she at least came up to the shoulder of the brown-haired ogler who had spoken. “Actually, we do. This is a private party, so if you don’t mind . . .”

The kid smirked. “Aw, don’t be that way, sweetheart.”

She shoved his arm away and gave him her best Domme glare. “I’ll be any way I want, jackass. Now, take your two friends and leave.”

The kid had balls or a lack of brains. Either way, he reached out to touch her again. Charlotte was fully aware of how quiet the room had gotten, but she wasn’t worried. Even though it was full of women, mostly submissives, none of them were shrinking violets, at least they weren’t in her eyes. She sensed someone else stand behind her and knew instinctively it was the other Domme in the room, Roxanne London—pediatrician and a fellow Whip Master at The Covenant. While gentle with her patients, the tall, auburn-haired doctor was a force to be reckoned with when it came to protecting submissives.

Before the asshole could touch her again, Charlotte grabbed his wrist and twisted, shoving him against the wall, face first, with a thud. She lifted his hand behind his back until he went up on his toes and cried out in pain. His two buddies must have stepped forward to help him because a sudden crack split the air. Without looking, she knew Mistress Roxy had the new, pink bullwhip in her hand and had snapped a warning over their heads, freezing them in place.

“Uh-uh-uh, gentlemen. Stay right where you are. I missed on purpose—the next time I won’t.”

“What the hell?” The roared question had come from Mike Donovan as he strode in with two bouncers on his heels. “Charlotte, are you okay?”

With a final shove, she released the asshole, who spun around and growled at her. Due to her training, Charlotte immediately took a defensive stance, ready to kick the guy’s ass. But before he could unleash his anger, Mike grabbed him by his arm and the back of his neck. “You’re out of here.” He thrust the drunk toward the bouncers, then pointed at the two other intoxicated men. “You idiots are gone, too. Don’t let me see your faces until you learn to respect women. I don’t tolerate this shit in my bar.”

The room filled with riotous laughter as the waitress brought in another pitcher of margaritas. Ninja-girl was the nickname Kristen had earned during her first visit to The Covenant when she’d started dating one of the owners, Devon, who was now her husband. She’d interrupted two submissives bullying a third, Colleen Helm, in the locker room and had kicked their butts. Colleen had been grateful and, now that she was working for Trident Security as the office manager, she knew how to handle herself and was paying it forward whenever she saw someone being bullied.

Mike grinned at the group of women he’d gotten to know quite well over the past two years, then eyed Charlotte. “Gotta love a woman who kicks ass.”

Crossing her arms, she stared at him with the commanding look she usually reserved for the submissives at the club, and the men and women on probation with the law who had to check in with her every month. To her surprise, Mike’s smile fell, and so did his gaze—not to her chest, hips, or legs like most men, but to her feet. Well, hell. Who would have guessed? Master Jake’s handsome, older brother is a sexual submissive.

While Mike Donovan didn’t have his brother’s movie-star-worthy looks, he was still handsome in his own right. His hair was a lighter brown than Jake’s, and instead of startling green eyes, his were hazel with a touch of amber. He stood six-foot even, five inches shorter than his younger brother, and although he wasn’t as lean, his physique was toned enough to be admired.

Charlotte knew Jake and Mike hadn’t been close for years, but that had changed recently. They’d grown even closer over the past few months since Jake had moved back to Tampa. Apparently, Mike had taken his sibling up on an offer to work out at Trident’s gym and training facilities with him. Charlotte hadn’t realized until now that the slight beer belly the older Donovan brother used to sport was almost completely gone and his arms, shoulders, and chest were leaner and more defined. All in all, a very tempting package, especially since he was exuding a submissiveness she hadn’t noticed before now. Was he aware of it? Well, that was the question burning through Charlotte’s mind at the moment, and she was looking forward to discovering the answer.

Other Books in Doms of The Covenant Series