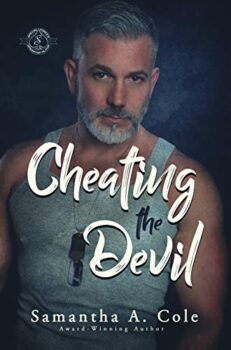 Delta Force Colonel Bradley “Tank” Barton never expected to fall for a woman with a bad-ass past, but fate had other plans, and he certainly wasn’t complaining.

Avery Knapp had worked as an undercover agent before burning out after twenty years. To redeem her wounded soul, she earned a nursing degree and now cares for injured or ill covert operatives who require someone with a high security clearance.

While on vacation, Brad thought his only worry was introducing his adult daughter, Lori, to the woman who’d captured his heart. But revenge is on someone’s agenda. When Lori and Avery disappear, Brad needs operatives from Delta, Deimos, and Trident Security to help find them before it’s too late. He wouldn’t survive if he lost the two women he loves more than life itself.

In addition to being part of Susan Stoker’s Special Forces: Operation Alpha Kindle World, Cheating the Devil is Book 2 in the Deimos series, which is a spinoff of Samantha A. Cole’s popular Trident Security series.

***This book was previously published in Amazon Kindle Worlds***

Slowly pulling down the sheet, Bradley Barton exposed his lover’s bare back, then laid light kisses across her shoulder blade. Her skin was exquisite—soft, smooth, and tanned. His morning wood nestled against her thigh as he ran a hand over her shapely ass.

“Mmm. What time is it?” Avery murmured as she stirred.

He brushed his lips over her spine. “Oh-six-hundred.”

“What!” The last of the covers went flying as she jumped from the bed and rushed into the master bedroom’s attached bath, unfazed by her nakedness. “Brad, you were supposed to wake me earlier! We have to be at the airport by 7:30! I swear, if I’m not wearing my bikini and sipping a Mai Tai by the pool in Aruba by 2:30, you’re going to be on my shit list.” He heard the shower turn on, then she stuck her head back around the door jamb and pointed at him. “And that’s not where you want to start our vacation.”

She grinned at him, then shook her head and disappeared into the bathroom again. Brad debated whether to join her but figured there’d be plenty of time for intimacy during the next seven days. How he’d gotten so lucky to have such a gorgeous, kick-ass woman interested in him was beyond comprehension. At fifty-six, he’d had more than his fair share of women over the years, but they’d been nice and sweet, with safe careers, and had eventually gotten tired of sharing their man with the United States Army. Even his ex-wife had left him shortly after their fifth anniversary, unwilling to uproot their daughter, Lori, for a transfer to yet another base—the third one in as many years. Brad hadn’t been surprised when Diane had asked for the divorce, and he’d been relieved at the time. The only thing that’d hurt was the fact his visits with Lori had become few and far between. When he’d moved to Fort Hood to take a new assignment with Delta Force, they’d stayed behind in Fayetteville, North Carolina. After Diane remarried a few years later, they’d moved to Jacksonville, closer to the East Coast.

Following the divorce, Brad had run through a bunch of one-night stands, since his training and missions didn’t leave him with a lot of time for anything more—at least not for a few years—and he’d been fine with that. Then, as he climbed the ranks to colonel, he’d dated a few women here and there—some lasting a few weeks, others a few months. But none of them, not even his ex-wife, could ever hold a candle to Avery Knapp.

At fifty-five, she had a petite, yet fit, body women half her age would kill for. Her shoulder-length, platinum hair was natural and highlighted the brown in her hazel eyes. She was intelligent, witty, caring, and, most of all, a bad-ass when she needed to be. At twenty-five, fluent in Mandarin, Malay, and Nepali, and about to graduate from Georgetown University with a master’s degree in Asian Studies, Avery had been recruited by the CIA. After working for them for five years as a covert agent, she was then recruited to join the ranks of a new agency—one that was even more secretive. Until two years ago, Brad had never heard of Deimos—named for the Greek god of terror—and that was saying a lot, since he commanded some of the most clandestine military operatives on the planet.

He knew all too well Avery couldn’t talk about most of the things she’d done over the sixteen years working as a covert operative for Uncle Sam, but he was glad that was all behind her now. Having unofficially retired from the agency—one never fully retired from black-ops agencies—she’d gotten her nursing degree and was now assigned to help another female Deimos operative recover from injuries received on a mission that had left her in a wheelchair. Unable to work in the field anymore, Haven Caldwell had been appointed to the intelligence division, working from her handicapped-accessible house, and needed someone with a high security clearance to be her aide. Avery lived in a guest house on the secure Harker Heights property that’d become Haven’s home. She cooked, cleaned, and helped the younger woman with her rehab.

Ironically, some of Brad’s men had been on the same mission when Haven had been shot in the back. One of them, Lucas “Frisco” Ingram, had not only rescued her but had fallen in love with her in the aftermath. It had taken a while for him to win her heart, but now the two were an engaged couple. It was through them, and another joint mission, that Brad and Avery had met.

“Shower’s all yours. Get a move on, Shrek.” With a towel wrapped around her torso and another around her wet hair, Avery gave him a flirtatious wink, before reaching for the clothes she’d left out on a chair that sat in the corner of the bedroom. He loved the private nickname she’d given him since, at six foot three, he towered over her by a good eleven inches. She never used the moniker around others, for which he was grateful. The nickname he’d been given by his fellow Delta operatives, years ago, was “Tank,” but with his current rank, there were few people at Fort Hood who used it.

“Yes, ma’am!” He tossed the sheets aside, unashamed that he was still semi-hard. It wasn’t anything she hadn’t seen before over the past four months since they’d started dating.

About fifty minutes later, they pulled into the parking lot of the Killeen-Fort Hood Regional Airport as Avery disconnected the phone call she’d been on. Brad turned off the engine and glanced at her. “Roxie’s okay?” he asked, having caught a few tidbits of her conversation with Haven.

“Yeah, Haven said she’s mopey, probably just missing me. This is the first time I’ll be leaving her behind for more than a few hours.” Roxie was her golden retriever/border collie mix she’d left in Haven and Frisco’s care. The Delta operative had moved into his fiancée’s home last month after he and his team had returned from a three-month mission overseas.

Pulling the handle to open the driver’s door, Brad smiled. “She’ll probably give me an attitude when we get back for taking you away.”

“Nah. She loves you too much. You spoil her rotten with treats. And don’t deny it; I see you sneaking them to her all the time.”

“Hey, bribery works. She’s not climbing between us on the couch or in bed anymore.”

Avery laughed as she got out of the SUV and met him at the tailgate. He retrieved their suitcases and locked the vehicle. Taking the two smaller, carry-on bags, he sat them on top of the larger suitcases, then wheeled all four toward the small, private terminal. A friend of his, Randall Munro, had his own four-seater plane and had volunteered to fly them to Houston where they’d catch a commercial flight to the island. The guy had family in the city, so he often flew down there to visit, and Brad had taken him up on the offer.

After settling Avery into a seat inside the terminal and leaving the bags with her, he went out the back door in search of Randy. Brad spotted the man doing a preflight checklist on the plane a short distance away, at the same time Randy had looked up and noticed him. The pilot flashed his five fingers three times indicating he needed another fifteen minutes. Since they’d gotten there early, Brad had expected that and gave his friend a thumbs-up.

Stepping back into the terminal, Brad pulled out his cell phone and found the number he wanted, then waited for the call to be picked up.

“Bryson.” Captain Keane “Ghost” Bryson was one of the Delta Force officers serving under Brad’s command.

“Good morning, sir. Are you on your way to Aruba yet?”

He stared out the window as another plane took off with a roar from the main runway a mile away from the private terminal. “Just got to the airport and we’ve got a few minutes, so I figured I’d check in. Anything I need to know about?”

Bryson gave him an update on a few things that had popped up over the last fifteen hours since Brad had left the base to start his leave. There was nothing pressing on the agenda, and even if there was, his men could handle it. They were the best of the best, and he trusted them implicitly. “All right. Sounds good. I spoke to Colonel Sheppard last night. Notify him if anything comes up. I’ll also be checking in during the week.”

“Always have to have one foot on the base, huh? Everything will be fine, sir. Enjoy your vacation and your woman.”

Those last two words had him glancing over his shoulder to see Avery reading her Kindle, and he felt a stirring in his groin. Her hair was in a stylish bob that framed her pretty face. She’d chosen to wear a red, short-sleeved, Jersey-knit dress, that stopped just above her knees, and white, canvas, slip-on shoes for the five-and-a-half-hour trip to the island. Not for the first time in the last few days, he wondered what her bikini looked like since she wouldn’t let him see it until they got there. She really was a gorgeous woman no matter what setting or clothing she was in. And once again, he wondered how he’d gotten so lucky this late in life. “Thanks.”

Disconnecting the call, he made two more quick check-ins with other officers before striding back over to Avery. She lifted her head and smiled at him. “Everything okay?”

He took the seat next to her and tucked his phone into the thigh pocket of his khaki cargo pants. “Sounds like it. You know, it’s been so long since I took an actual vacation, I can’t help but feel everything will go to shit if I’m not ten minutes from the base.”

Smiling seductively, she set her hand on his thigh and squeezed. “Don’t worry, Shrek, you’ll remember how to enjoy yourself. I’ll do everything I can to make sure you do.”

“Yeah?” He asked while raising a brow.

“Uh-huh.” Leaning closer, she brushed her lips against his. “Everything.”