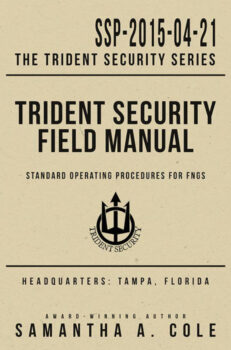 The Trident Security Field Manual: Standard Operating Procedures for FNGs (f*cking new guys—and anyone else who wants to read it) is a fun compilation of extras for fans of the TS series and its spinoffs. Fans will get an extended Who’s Who of Trident Security and The Covenant, Character Profiles from the original TS series and the Doms of The Covenant series, a Q&A session with characters from the TS series, the TS Omega Team series, and the Doms of The Covenant series, and Exclusive Short Stories—four of which had been previously published, but no longer available, on Samantha A. Cole’s website, plus a never before released short story featuring fan-favorites Jenn Mullins and Doug Henderson! To wrap things up, family trees for the Sexy Six-Pack are included!