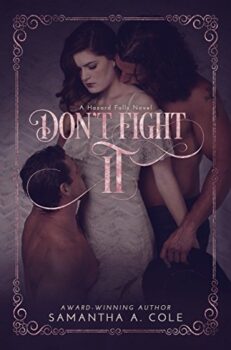 When it feels right, don’t fight it.

Shane and Tucker have been mourning their wife’s death for two years. Their love for each other and their daughter has gotten them through the rough time. But while Shane is ready to take a chance on a new future, Tucker is stuck in the past, finding it hard to let go.

Paige is trying to put her life back together after her marriage crumbled following her husband’s arrest. Leaving California behind, she moves to Kansas, taking a job as a housekeeper and a nanny to a six-year-old girl.

She shouldn’t be dreaming of her sexy new bosses, but after seeing a steamy encounter between the two men, she can’t get either of them out of her mind.

Shane is certain Paige is the one who can finally heal them, but convincing her and Tucker might take a little scheming. Will it backfire or give them all a second chance at love?

**An exciting new series from the author of the Trident Security series!

After tucking Arianna into bed and reading her a story, Shane closed her bedroom door and went to find Paige. She was sitting on the couch in the family room with an e-reader in her hand, but her gaze was focused on the TV’s blank screen. She lifted her chin when she heard him enter the room.

Striding over to the bookcases, he reached up and found the key that was hidden from Arianna. Unlocking the built-in bar, he opened the drop-down door. “Would you like a little something to drink?”

He glanced over his shoulder and held up an empty, lowball glass. “It’s not a big deal to have an off-duty drink, Paige. I’m going to have one. You’re more than welcome to join me.”

“Thank you. If you have something light, please.”

There wasn’t much in terms of “light,” but he pulled out a bottle from the back. “I’ve got Bailey’s. Is that okay?”

After pouring a glass of the creamy liqueur, he put two ounces of his favorite scotch in a glass. Taking both, he handed Paige hers over the back of the couch, then grabbed a small framed photo from a shelf. Skirting around the couch, he took a seat in the recliner closest to her. A sigh escaped him as he studied the photograph before showing it to Paige. “You might have noticed there are a lot of pictures of Arianna’s mother, Sarah.”

“I did. Arianna told me she passed away.”

“Yeah, she did—two years ago.” He inhaled deeply, then let it out slowly, his gaze not meeting hers. “She wasn’t just Arianna’s mother, Paige. She was my wife.” He paused for a heartbeat or two. “She was also Tucker’s wife. We had a ménage marriage.”

Silence filled the room, and a few moments passed before he finally risked looking at her. Her eyes were wide, her mouth in an “O,” but there was no condemnation there, just surprise. Well, at least she hadn’t run from the room, screaming. He took a sip of scotch and then forged ahead. “I’ve known since I was a teenager that I liked both men and women. When Tuck and I fell for Sarah, after she moved here to teach at the elementary school, we fell for each other too. It may go against the norms of society, but for us, it felt right. I know I’m throwing a heap of personal stuff at you here, but you have a right to know—especially since the whole town knows already. Some people ridiculed us—still do—but many were supportive after they got over the shock. Hannah had no problems working for us, but I’m sure there are going to be some curious people who will want to know if we’re having a relationship with our new house manager who’s closer to our age. How you handle that is up to you, as long as Arianna isn’t swept into it. We’ll do our best to discourage any false rumors. If it’s too much for you, and you don’t want to work for us, I’ll understand, but I just ask that you give me some warning, so I can work on getting a replacement.”

Shane didn’t know what he’d expected but it wasn’t the loud snort that came from her, followed by a grin and an eye roll. “Please—if I can handle the press and all my former friends and neighbors pointing fingers at me in California, I can handle small-town gossip. Been there, done that, got the T-shirt.”

“You’re not put off by the ménage?”

She shrugged her shoulders. “Why should I be? There’s a lot of kinky things people are into out on the West Coast; a ménage marriage with all three people in love with each other is on the tamer side. So, to answer your question, no I’m not put off by it. Have I ever known anyone in a ménage relationship before? No. Do I think there’s anything wrong with it between consenting adults? Again, no. In fact, I give your Sarah a lot of credit. She bucked the norms of society and followed her heart. Many women don’t have the guts to do that, even in this day and age.”

Sagging back into his chair, Shane breathed a sigh of relief. “Thank God. I was afraid you’d be freaked out by it and I’d have to find another house manager.”

“Not at all. But now the skinny-dipping title makes a lot more sense.” Shane chuckled along with her, then Paige tilted her head. “I do have a question, though.”

He raised an eyebrow at her.

“What does Tucker have against me?”

That was the question of the hour. Shane grimaced. “For some reason, he misinterpreted me being nice to you as me flirting with you. I’ve never given him or Sarah a reason to think I’d cheat on them, so I’m not sure where it’s coming from. I will say that Tuck doesn’t do well with any change in the status quo—at least, not right away. It takes him a little while to come to terms with it. Will you give him some time?”

“Absolutely. But please, tell me if I’m causing any problems between you, and I’ll let him know in no uncertain terms, I’m not interested in either of you.”

His smile almost faltered, but Shane managed to keep it in place. Now, why were her words so disappointing? He’d only known her a few hours. “I don’t think it’ll come to that, but I’ll keep you in the loop.”

Other Books in Hazard Falls Series