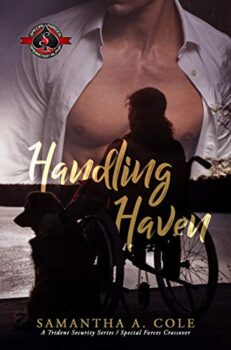 Haven Caldwell had the world at her feet. Traveling around the globe, hobnobbing with the elite, she did things other people could only dream of, but it was all a cover. As a covert operative of Deimos, a US black-ops agency that has more secrets than the CIA, she knew how to handle herself in any given situation, even if it required killing someone. But when her latest mission goes awry, leaving her in a wheelchair, she feels she has nothing left to live for.

Delta Force member, Sergeant First Class Lucas “Frisco” Ingram, will never forget the day he met the pretty spy whose life was turned upside down in a split second. Torn and bleeding, she begged him to leave her to die, but he couldn’t do it. Now he can’t get her out of his head, and she wants nothing to do with him. But when a terrorist threatens an attack on American soil, Haven might be the only one who can help him and his teammates stop it.

While forced to work together, can Lucas convince Haven his feelings for her are not a result of guilt or pity and he has truly fallen for her? Will Haven figure out she has something worth fighting for staring her right in the face? Or will their chance for a happy-ever-after be blown to hell?

In addition to being part of Susan Stoker’s Special Forces: Operation Alpha Kindle World, Handling Haven is Book 1 in the Deimos series, which is a spinoff of Samantha A. Cole’s popular Trident Security series.

***This book was previously published in Amazon Kindle Worlds***

Scanning the crowded ballroom filled with a majority of the eight-hundred people attending the celebration, US Army Captain Keane “Ghost” Bryson studied each person diligently, trying to narrow down possible targets. Someone, or more than one someone, was not here to rub elbows with everyone else. Nope, they had an ulterior motive . . . a nefarious one. The guest list was a who’s who of the famous and infamous of the world—movie stars, politicians, royalty, Fortune 500 business owners, and those who were known just because the tabloids pasted their pictures on the cover every freaking week for some stupid reason.

The festivities were for the wedding of Bollywood movie stars Vinod Kayal and Anya Nambisan. In addition to being the highest paid and most adored actress in India, Anya was also the daughter of India’s Prime Minister. But word on the Dark Web, a communication and trade network for illegal transactions, was that someone was using the event to finalize a deal. Ghost and his Delta Force teammates were there to stop the sale and transfer of nuclear launch codes, under the guise of being Wesley Sutton’s security team. The Virginia senator’s wife, Hollywood starlet, Darby Scott, was a good friend of the bride. The couple had agreed to supply the elite soldiers with a cover since Sutton was on the senate’s Homeland Security and Governmental Affairs committee. The man had proven in the past he could be trusted with the real reason for his bodyguards’ presence.

Prior to the event, the team had been able to identify the seller, but the buyer, who was currently in possession of the nuke, was a mystery that hadn’t been solved yet. Ghost’s head was on constant swivel as he mentally assessed and cataloged everyone in sight. There were a few other undercover Delta Team members scattered about the grand ballroom, as well as outside on the huge patio and manicured lawn, where some people were enjoying the pleasant evening air. The rest of the highly-trained team were hidden in the thick jungle surrounding the venue’s compound, a few miles outside Mumbai’s city limits.

His gaze passed over a small group of guests conversing before zipping back to them as recognition kicked in. While he didn’t know the dark-haired beauty in a stunning, blue evening gown, her tuxedoed date was all too familiar to the Delta Force soldier. He stood a commanding six foot four, his long, dirty-blond hair pulled back in a ponytail at his nape, and could kill someone in at least two dozen ways. The man with one name worked for Deimos, an American black-ops agency that ninety-nine percent of the population didn’t know existed.

“Fuck,” Ghost whispered, catching the attention of his teammate standing next to him, also wearing a monkey suit. Damn, he hated undercover gigs that required black tie attire. The noose around his neck was practically strangling him.

Being the trained operative he was, Cormac “Fletch” Fletcher remained stoic and seemingly unaffected by the muttered curse. “What’s up?”

Turning slowly, Fletch zeroed in on the problem. “Well, shit. What the fuck is Carter doing here?”

“I don’t know, but I can guarantee he’s not just here for the food.” Once, just once, Ghost wished the US government and military branches would talk to each other and share a few secrets so their operatives weren’t shocked and pissed when they found out someone else was most likely undercover for the same damn reasons.

As if he felt their eyes upon him, the spy looked in their direction while laughing at something that was said in the group. His gaze met Ghost’s for only a split second, but there was no doubt he’d recognized the two Deltas who he’d run into on undercover missions before. Hopefully, he was using the alias they knew about—the CEO of a very successful import/export company. While the business was legitimate, it was really run by Deimos to supply their operatives with a cover that was nearly impenetrable.

With his arm around his date, Carter strolled away from the group, and, without looking at them, slowly meandered his way over to where Ghost and Fletch were standing on the outskirts of the crowd. The couple chatted as they moved, giving the appearance they were just like every other guest in the room—who wasn’t a spy or terrorist. Thankfully, Carter was one of the good guys and worked for the US of A, because what little Ghost knew of the spy, he could earn a similar eerie moniker like Phantom, Phantasm, or Shadow. The spy could float in and back out of any situation, and if he didn’t want you to know he was there, you never would.

The couple had almost passed right by them, when Carter feigned a double take, snapped his fingers, and pointed at Ghost. “Hey, John Benbrook, right? You were on my security team a few years ago. Either that or you could be his twin.”

John Benbrook was one of Ghost’s aliases and the one he’d used several times in the other man’s presence. And since he’d been standing here, pretending to be a bodyguard, it was the best way to start the conversation the spy apparently wanted to have. Also in those three brief sentences, he’d given Ghost enough information to hold up his side of the dialogue. While his real name was T. Carter—no one knew what the T stood for, or if they did they weren’t telling or still alive—the persona he’d cultivated over the years was Carter Burke.

“Yes, sir, Mr. Burke. Nice to see you again.” He extended his hand for the other man to shake.

“It’s been a while, but I never forget a face or a name. Darling, this is John Benbrook. He was on my security team before moving onto bigger fish. John, this is my girlfriend and associate, Jordyn Dominguez.” In other words, the gorgeous woman was also here in an undercover capacity. It was a fair bet her surname was an alias, but it was up for grabs on whether her first name was real. Some agents found it easier to alter one instead of both.

Ghost dipped his chin once. “Pleased to meet you, Ms. Dominguez.” He gestured to Fletch. “Allow me to introduce you to my teammate, Keith Shelton.” Carter knew Fletch’s real name, but the alias was a new one. The two men shook hands as he explained, “We’re on Senator Sutton’s detail tonight, although, I miss the days covering your back. Skydiving and racing Lamborghinis is a lot more fun than watching everyone else get drunk and try to top each other with how much money they have. And don’t even get me started on the politics.”

The spy snorted. “Anytime you want to join me again, you’re more than welcome. But I’m actually a little surprised you’re here. A mutual friend of ours and his buddies are camping in the woods this weekend, and I could have sworn he told me you and a few guys were going too.”

Oh, shit. He raised his eyebrows in mild curiosity at the man’s veiled statement—anyone eavesdropping wouldn’t have a clue the man was talking about anything but camping—however on the inside, Ghost’s stomach plummeted as his heart rate sped up. Potential Clusterfuck-101, here we come.