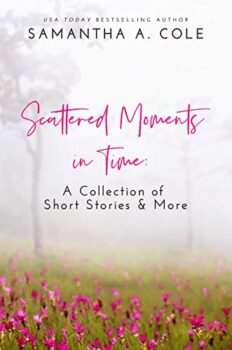 Scattered Moments in Time is a collection of short stories written by Samantha A. Cole. An eclectic mix of themes, some are quirky and cute or deep and inspirational, while a few are dark and mournful. There’s a little something for everyone.

Among the short stories, the following are included:

Unconditional: Love Like a Dog — Rescued dog, Jinx, is on a mission to find his human a mate. An adorable story from a canine’s point of view. (Previously released in the Be Their Voice Anthology, which is no longer in publication.)

The Hatred Within — What happens when the President of the United States orders all police departments to be disbanded and martial law to replace them? The members of NYPD don’t want to find out.

Stoke the Flames — When Cade realizes Jenna is the woman his heart has been searching for, he knows he’ll have to work to convince her. Stoking the flames between them shouldn’t be too hard, though—after all, he is a fireman. (Previously released in the Down & Dirty Anthology, which is no longer in publication.)

Stud Muffin — The last person Rafe expected to see as a guest at his cousin’s wedding was the woman of his dreams. He’d worked with Suki months earlier on a serial murder case, and he hasn’t been able to get her out of his mind since. Was fate giving him a second opportunity to get to know her? There’s only one way to find out.

To purchase copies of my poem, “I AM” which is a tribute to police officers, please see my store on Zazzle. It’s available on posters, canvas, and metal wall hangings.

I AM – A Tribute to Police Officers

"Samantha A. Cole is a writer after my own heart. Scattered Moments In Time brings together a collection of short stories and novellas that can only be described as diverse in subject, but all arguably fit within the scope of contemporary fiction. They shift from heart-warming to heartbreaking in a few pages, from uplifting to soulful in the next. The title sums up the collection well as each story gives us a poignant snapshot of different moments in time at different stages of life from many different points of view... young, old, even that of a dog. It’s particularly refreshing to read a collection that isn’t bound together by a ‘theme’ other than that the stories are all written by the same author. It gives each story much greater authenticity, a feeling that they’re written from the heart rather than written to fit a brief.

"Overall, I wouldn’t say Scattered Moments In Time has a weak link, which can be the case in collections with such diversity. I suspect every reader will pick their favorite stories though. For me, I particularly enjoyed The Lost Man which gives us a stream of consciousness story with barely any dialogue that is engaging from the first word to the last. Likewise, I Am, the only verse in the collection, proves you don’t need a lot of words to tell a powerful story, even in generalized terms. If you haven’t read anything by Samantha A. Cole, this collection is the ideal introduction to her scope and style. It’s a polished, smooth, and satisfying read."