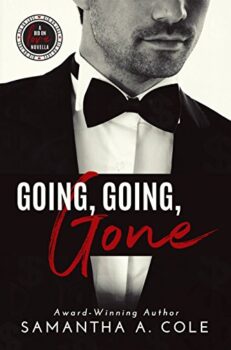 Local newspaper reporter, Nadine Marx, has been put in charge of this year’s charity fundraiser. The Bid on Love Bachelor Auction gives bidders the chance to spend the weekend with some of the hottest, single guys around. Which lucky women will win the date of their dreams? Or will some of these dates become a nightmare?

Vanessa Adams is trying to save a piece of history, a farm she’s convinced was once part of the Underground Railroad, but lack of proof and property developer Dylan McBride stand in her way. After he dodges her attempts to meet with him, she’s forced to take things a step further. A date with him is being auctioned off at a charity event, and she refuses to let the opportunity slip through her fingers.

Dylan doesn’t want to be sold like a slab of meat. He especially doesn’t want to be stuck on a date with a woman who was desperate enough to “buy” him. When his plan to get out of it goes awry, he doesn’t think things could get any worse. He was wrong.

Thousands of feet up in the air . . . might not be the best place to be when sparks fly.

The Bid on Love series unites the talents of eight romance authors to bring you stories that will leave you breathless and begging for more!

Book 1: Souled by KL Shandwick
Book 2: Going, Going Gone by Samantha A. Cole
Book 3: Joker by M.A. Stone
Book 4: A Chance at L.O.V.E. by KL Myers
Book 5: For Her Amusement by Heather Anne
Book 6: Stab at Love by Kristine Mason
Book 7: Bidding on the Bodyguard by Kristi Avalon
Book 8: Afraid of Love by Annelise Reynolds

“All right, ladies,” Nadine said into the microphone she was holding. “Here we go with Bachelor #2! Get your paddles ready to bid!”

Dylan McBride strode onto the stage, dressed in the tuxedo and mask she’d been expecting. Had she not known what he looked like and known he was the bachelor for the balloon date, she probably wouldn’t have had a clue who he was. McBride was a handsome man—his photo was on his company’s website and had been in the local newspaper a few times—and Vanessa had to admit she’d definitely be checking him out if he walked by her one day. The tuxedo he was wearing looked like it had been tailor-made for him. His dark-brown hair looked like silk and probably felt like it too. She couldn’t really see his eyes between the mask and the distance, but she knew from the photos that they were brown. Too bad he’d been annoying the hell out of her since she’d first tried to contact him about the Coldrick property, because she might have actually enjoyed herself on their “date.” That is, if she managed to win.

After Nadine reiterated what the date consisted of, the male auctioneer started the bidding. Quickly, it climbed from $100 to over $1000 before slowing a bit. Whenever another woman placed a bid, Vanessa lifted her paddle and upped it, trying to show she wasn’t going to give up. McBride didn’t seem happy about it either—not just her bidding, but everyone’s. He wasn’t exactly frowning, but he also wasn’t smiling. Vanessa recalled the conversation between his secretary and Nadine—they’d said he’d been conned into being here, and Vanessa wondered how. Did the auction organizer have some dirt on him she was using for blackmail? If she did, Vanessa would love to know what it was, so she could use it to get him to push back the sale date if her begging didn’t work.

Vanessa bit her bottom lip, silently praying no one raised their paddle.

Applause came from the audience as she breathed a sigh of relief. Dozens of gazes looked in her direction, but they were all blocked out except one. Dylan McBride was still standing on the stage and was staring at her—he had been for the last few minutes of the bidding. She could almost feel the heat directed at her, and she didn’t know if that was a good or bad thing. She swallowed hard under his scrutiny. A small smile appeared on his partially hidden face, and he dipped his chin once, before taking off his mask. Damn, the man was even better looking in person.

“Thank you, bidder! You’ve won a date with the handsome Dylan McBride of McBride Properties, Inc. Congratulations! Please come up to the payment table to the left of the stage. And thank you, Dylan, for donating your fun-filled date. All right, ladies! Here comes Bachelor #3 . . .”

Vanessa didn’t hear anything else that was said, because, holy shit, Dylan McBride just winked at her, and then exited stage left. Why her heart was pounding in her chest and she felt aroused she didn’t know. All the man had done was smile and wink at her. It wasn’t as if she’d never had a good-looking guy flirt with her from across the room before, but this had felt more than that. It was almost as if he’d issued a promise—one that would have her curling her toes and screaming his name in ecstasy.

“Holy shit, he’s hot,” Faith whispered a little too loudly. “After you convince him not to sell the farm, you should definitely tap that.”

Incredulously, her eyes went wide as she turned her attention to her friend. “Tap that? It’s a charity date, Faith, not a gigolo auction.”

Faith shrugged and grinned salaciously. “So, make sure there’s a second date, and then tap that.”

“You’re too much.” Rolling her eyes, she stood and then leaned down, so she could be heard over the current bidding. “Besides, I highly doubt I’m his type. And after he finds out why I bid on him, he’s probably going to make a run for it somewhere between the balloon ride and picnic. Now, let me go and empty out my checking account.”