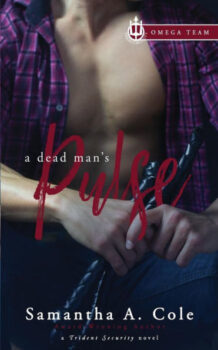 Marine First Sergeant Logan “Cowboy” Reese was rescued hours before he would’ve met the same fate as his five murdered teammates in Afghanistan. Returning to the US and civilian life hadn’t been part of his plans at this stage of his career, but dealing with PTSD forced his hand. However, an unexpected job offer with Trident Security, a private firm in Tampa, has him finding a purpose in life again, but will his flashbacks destroy a promising future altogether?

**The books of the Trident Security series and its spinoffs can be read as standalones, however, for optimum enjoyment they are best read in order.

Logan was the last one out the door. Taking Boss-man’s advice, he turned left and walked into the small employee kitchen to refill his coffee, before ambling back down the long hallway in the other direction to Ian’s office. He’d just taken a seat in one of the guest chairs when Ian strolled in, shutting the door behind him.

“How are things with Doc Dunbar?” Ian asked, taking his seat behind the large, dark wood desk.

He’d expected this—it had been awhile since Ian had asked how the therapy sessions were going. “Good. No problems have popped up lately. But I’m sure she’s already told you that. I like her; she’s as good as Dr. Tennyson.”

“Glad to hear it. I’ve known Trudy for a few years, and she’s helped us with some situations and cases in the past. The doc is also one of the psychologists we refer club members to.”

“No, she’s not, and I wouldn’t have outed her like that, without her consent, if she were. Members of the BDSM community like their privacy. It’s one of the reasons for the non-disclosure contract you all had to sign.” The team had also been told if they saw anyone who they knew was a member of The Covenant, out in public, they were to act like they didn’t know them or as if they knew them from somewhere else. Ian sat back in his chair. “Look, I know you’re about to get pushed out of your comfort zone, but I think you might benefit from it, in addition to dealing with the case. But if you’ve got a problem with it, now is the time to tell me.”

Before Logan could respond, the intercom on the desk buzzed and Colleen’s voice came through the speaker. “Ian, Officer Swift is here.”

The boss stabbed a red button on the device. “Send her in.” Ian stood and pinned Logan with a stare. “Give it a shot. You’ll have a week or two before you’ll be going into one of the clubs. If you find you can’t do it, let me know; we’ll move people around and leave you on a perimeter detail.”

Unsure of what Ian had meant when he’d said Logan would benefit from learning to be a Dom, Logan figured the assignment wouldn’t have been given to him if it was expected he would fail. Taking a deep breath, he let it out and nodded. “Okay. I’ll give it a try.”

The door behind him swung open, and he glanced over his shoulder to get his first look at the woman he’d be seeing a lot of very soon—literally. A brunette walked in, and not just any brunette, but the hot little number from the coffee shop, who’d basically told him to mind his own fucking business. The woman he’d been thinking about since he’d pulled out of the shopping center and driven to the compound. While her attitude had pissed him off at first, the more he thought about how she’d stood up to him, the more it turned him on. If they’d been in Hollywood, it would have made for a great meet cute—the scene in a movie when a romantic couple meet for the first time.

Logan grinned as he stood. The day is about to get a lot more interesting.