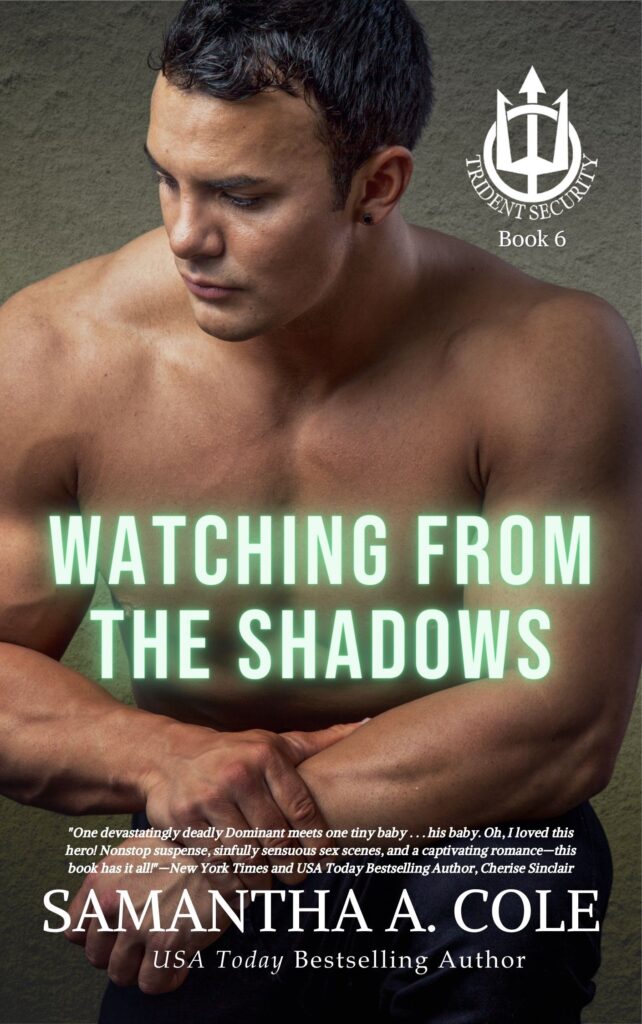 Watching From The Shadows

His hands went around to her back and caressed the soft skin he found there. Releasing her nipple, he pulled his head back, forcing her to ease her grip so he could look up at her with eyes heavy with desire. "How long, baby? How long have you been in the lifestyle?"

Trying to catch her breath, she twirled his soft black hair with her fingers. "Since college."

"Tell me more," he ordered as he kissed her collarbone. "How'd you start?"

"Our second year, one of our housemates took Nina and I to a munch, and I felt like I found a home, you know?" Oh, yeah, he knew. Munches were get-togethers for people interested in the lifestyle. It gave them an opportunity to talk to experienced Doms and subs without diving head first into play. He often saw that "found-a-home" look in newbies eyes when they realized they were more normal than they'd thought. "Nina said it wasn't for her, but she supported my need to learn more about it. I think it was our senior year when you told her you were a Dom. Of course, she told me, since we told each other everything."

His thumbs came to her front and brushed against her ribs. "And yet, she didn't tell me about you, which in hindsight, I would have reamed her if she had. Privacy and all that. So was any Dom lucky enough to catch your eye for a long period of time? Any relationships?"

Nodding, she tried to focus on answering him and not on what he was doing to her flesh. "A few. I usually dated a Dom before I played with him. The longest relationship I had was two years, but in the end, we both realized forever wasn't meant to be. We just grew apart, and soon play was the only thing we really had in common. I don't have to ask you the same question, since Nina knew you never had a long relationship with anyone-sub or not."

"The longest one was about five months and that was years ago. I never introduced the woman to Nina. I knew it wasn't forever, so why bother to get either of their hopes up?" He shrugged, and she wondered why he suddenly wanted to talk instead of putting his mouth to better use . . . or at least, a more pleasurable use. His eyes met hers. "I want you, Harper." His hips flexed toward her, showing her just how much he wanted her. "There's no denying that. But last time we put the proverbial cart before the horse. So this time, I want to take you out . . . on a date, before I take you to my bed. Can we do that? I've never courted a woman before, and this time, it feels wrong not to. I can't believe I'm saying this with you half naked in my lap, but I'm asking you to get dressed. I'm sure Jenn would love to help your mother babysit, and they'll be perfectly safe here with the team. I want to take you out to dinner tonight and romance you . . ." He raised his brow and chuckled. "And then I want to pick up where we're leaving off . . . after you've completed a limit list, so I know what toys to bring along."

She smiled at his teasing. Clearly, this was important to him. As much as she wanted to jump his bones at this very moment, she gave in to his request. "I'd be honored to go on a date with you, but do you think it's safe?"

Shifting her hips one more time, she moaned when her clit rubbed against the hard bulge in his jeans. Clutching her ass, he stilled her movements. "You're killing me here, sweetheart. When was the last time you had an orgasm?"

"Before the baby was born." Even she could hear the yearning in her voice. "About a month before."

"Seriously? You haven't gotten off in over six months?"

His wide eyes and the incredulous statement made her giggle. "Um . . . yeah. Dealing with an infant, while working full time, tends to be a tad tiring."

"Shit. Well, let's see what we can do about that." He turned her body until she was sitting sideways on his lap again. Tugging on the string at the top of her stylish sweatpants, he undid the knot and then slid his hand under the waistband faster than his intent registered in her mind.

Curling the tips of his fingers, he breached the entrance to her core. She spread her legs wider to give him more room as his mouth latched on to the tit closest to him. "Oh, fuck, Marco! Yes!"

A pop sounded when he stopped sucking and looked up at her. "This is going to be a quickie, baby. Just enough to take the edge off, but not enough to completely satisfy you. That we'll take care of later."

"Anything. Oh, please anything."

His fingers plunged deep, then withdrew and plunged in once more. Over and over. Faster and faster. Then he held them inside her and searched . . . searched for the hidden spot which would send her flying. She panted for air as her body soared higher and higher. He'd been right. This was going to be a quickie-she was right there . . . just a little-

He prolonged the orgasmic waves as long as he could with the two fingers rubbing her G-spot and his thumb strumming her clit. Flashes of light appeared before her closed eyes until she had nothing more to give him and began to float back down to earth. His mouth nuzzled her neck, and all she wanted to do was fall asleep in his arms, then wake up and do it again.