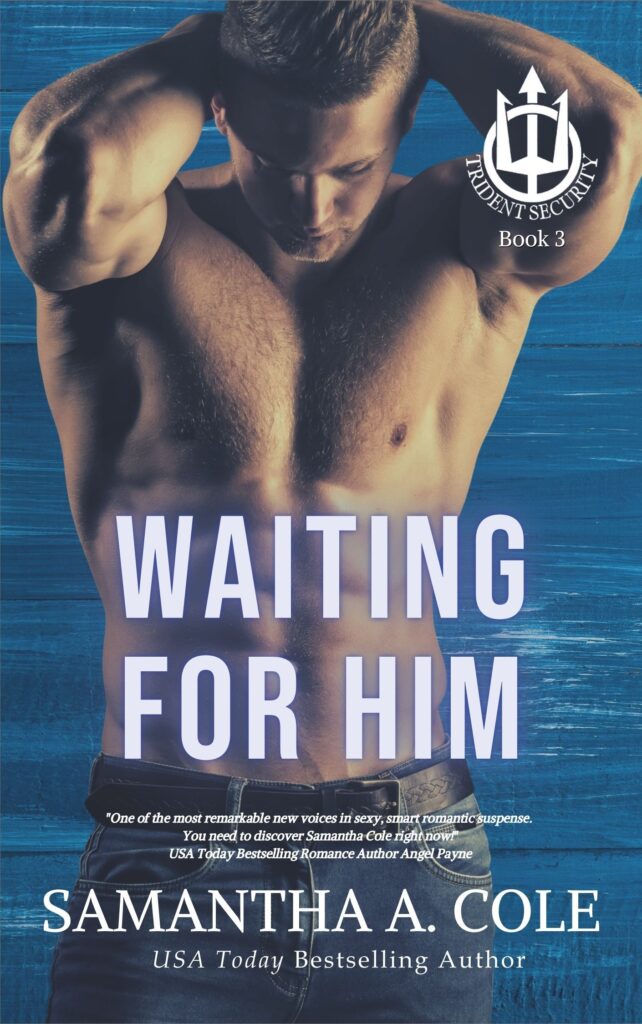 ***Each book in the Trident Security Series can be read as a stand-alone. However, for optimum enjoyment, they are best read in order.

He grabbed her around the waist and pulled her into his lap. “Kids with you? Hell, yeah.” He nuzzled her neck. She was glad his teammates couldn’t see them from where they sat toward the back of the plane as he cupped her breast, squeezing and massaging it. “As many as we can have. Don’t think of me as a caveman . . . well, in some ways I can be . . . but the thought of you ‘barefoot and pregnant’ with my children is a big, fucking turn-on. And just think of all the fun we’d have trying.”

His hand left her breast and worked its way between her thighs. He rubbed her sex through her sweatpants and she knew he could feel the heat and moisture emanating from her. Kat moaned lowly and separated her legs to give him a little more room to work with. She completely forgot they weren’t exactly alone. All she knew was the pleasure he was giving her. She squirmed on his lap trying to get closer to him and felt his rigid cock against her hip.

Benny lowered the tone of his voice. “Sit still, Kitten. Put your arms around me and your face in my neck. Try to stay quiet.”

Desire flooded her. She did as she was told as he loosened the tie to her sweatpants and put his hand inside them. His fingers brushed over her clit and went lower to her wet pussy. Her breathing increased as her lips touched his neck. Putting one finger inside her, he stroked her gently at first. “You like this, don’t you, Kitten? You like how I’m playing with you, knowing Marco or Dev could walk up here at any moment and see my hand down your pants. They could see how flushed and aroused you are.” He added a second finger, maintaining the same slow, torturous pace. “Answer me, Kitten. Do you like this, knowing you could get caught being so naughty? Do you want to cum?”

She let out a low disappointed cry. Instead of doing as she wanted him to, he removed his hand from her pants, and brought it to his mouth. Pulling back to watch him, her eyes widened as he licked her juices from his fingers.

“Mmm. So sweet and delicious.” His hand went back down her pants and this time he began to play with her clit. His eyes were on her face, watching her reactions. “I wish I could throw you on one of the couches and bury my face between your legs. I could eat you for hours, making you come over and over again until I’ve had my fill. And then I’d put you on your hands and knees, and take you from behind. Fucking you. Claiming you. Owning you. You’re mine, Kitten. Mine.”

His last word had come out on a growl and she moaned with need and want. He’d spoken the truth. She was his. She always had been and always would be. He owned her heart, mind, and soul. No other man could make her feel the way Benny did. She loved him. Still. Now. Forever.

Her heart rate and breathing increased as her eyes closed. With his other hand, he grabbed her hair and pulled her mouth to his. She instantly opened her lips and let his tongue in to duel with hers. He increased the pace and pressure of his fingers against her clit, but it wasn’t enough to send her over. And, holy shit, she wanted to. She wanted to fall into an orgasmic abyss.

Her orgasm hit her hard. Pussy walls squeezed and throbbed around his fingers as a rush of fluid escaped her. He’d taken her mouth again, muffling her sounds of release, and waves of pleasure assailed her. His fingers slowed while she floated back to him. He smiled at her flushed face and sated expression. “Liked that, didn’t you?” Pulling his hand out of her pants, he licked his fingers as she cuddled closer.

“Mmm-hmm.” Her cheeks flushed, but this time it wasn’t from arousal. “Do you think they heard?”

Chuckling, he gave her a quick kiss. “If they did, it’s nothing they haven’t heard before in the club.” He lifted her and placed her back in the seat next to him. “Stay here a second while I get a towel to clean you up.”

A few moments later he was back with two paper towels, one damp, and the other dry. “This was all they had on board.” She sat blushing while he quickly cleaned between her legs, and retied the strings of her sweatpants. He left her briefly again to dispose of the paper towels then adjusted himself before sitting beside her. “Next time, we’ll have to officially induct you into the mile-high club with my cock deep inside you.”

She giggled and snuggled against his chest as he wrapped his arm around her shoulders. “You’re incorrigible.”