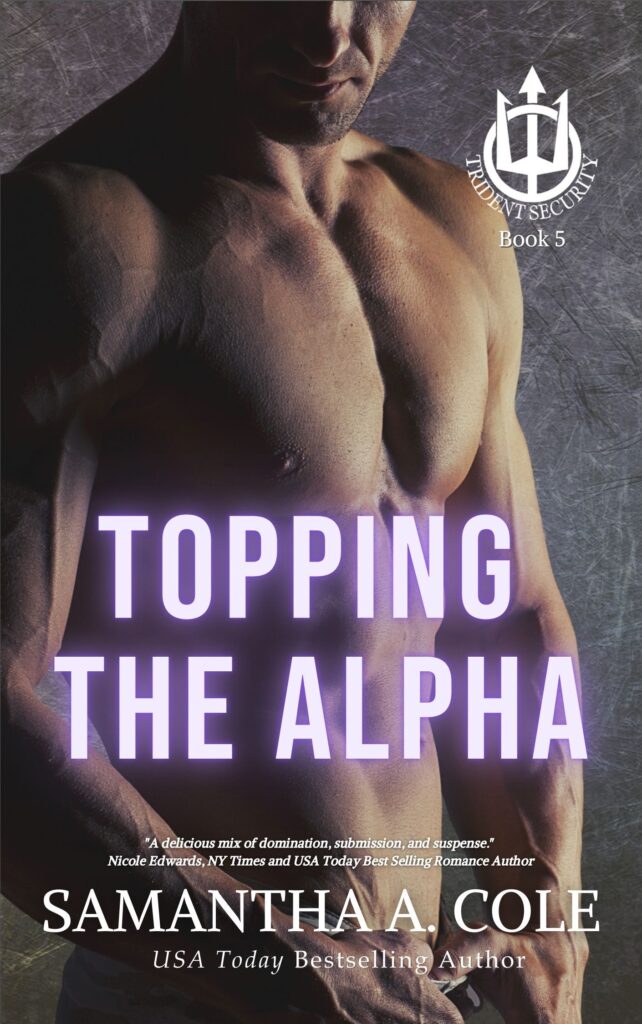 Getting involved with your brothers’ friend and employee is never a good idea, but after being dominated by Jake Donovan for one night, Nick Sawyer wants more. A Navy SEAL, Nick’s been the alpha in every relationship he’s ever had, but now finds himself craving to submit to Jake again. The problem is Jake’s determined that will never happen.

Thrown together to help a girl in danger, Nick starts breaking through Jake’s defenses, but when things go awry, Jake must confront the ghosts from his past before he can ever think about a future. Nick just hopes that future includes him.

Nick paced back and forth in Devon’s office as Trident’s canine, Beau, watched him in what appeared to be entertained amusement. The protection-trained, lab/pit mix was lying on the leather couch and his big head swiveled from side to side as he followed the human’s aggravated movements. Nick’s blood was just now coming down from a full boil. He didn’t know what he’d anticipated when he saw Jake again, but what happened in reality hadn’t been it. And he definitely hadn’t expected to see him hooking up with some guy in the airport. Then the man had been intentionally antagonizing him and it’d worked. If they hadn’t been doing sixty-five miles per hour down the highway, he would have taken a swing at him when Jake said their night together had been a meaningless fuck. Instead Nick had gritted his teeth, turned away, and stared at nothing in particular outside his window.

Now, still frustrated, he ran a hand through the jet-black hair all the Sawyer boys had inherited from their father. While Ian was still on a conference call, their other brother, Devon, was on a mission in Ecuador with the rest of the Trident team. Nick wasn’t sure what the assignment was, but he could guess since their secretary, Colleen, told him it was a government contract. Trident had many federal government connections and, since the team consisted of six former Navy SEALs, their expertise was in high demand for black-op missions.

The four-man team was due back in three days, so for now, Jake and Ian were the only ones in the states holding down the fort. And damn it, just thinking of his one-time lover made him hard. When he’d spotted him in the airport, Jake had been wearing a pair of camo-cargo pants and a white wife-beater which had shown off his incredible physique. Nick hadn’t missed how men and women alike were checking out the hunk as if he’d just walked off a Fitness Magazine photo shoot. His chocolate brown hair had grown a little longer and been pulled back into a ponytail which landed an inch or so past the collar of his shirt. A two or three-day growth covered his jaw and upper lip, and Nick wondered what the rough whiskers would feel like on his bare ass as Jake’s tongue rimmed his hole.

Fuck! He quickly adjusted himself when he heard Ian’s office door fly open, and finished untucking his T-shirt just as his brother walked into Dev’s office.

“Hey, little bro. How was the flight?”

Nick gave Ian a hand-clasp and back-slapping. “Not bad. The only thing better than traveling first class would’ve been if you sent the company jet to get me.”

“Yeah, sorry about that, but it’s down in Ecuador with the team. You hungry? I haven’t eaten lunch yet.”

He grinned. “When have you ever known me to pass up food?”

His brother put his arm around him and squeezed his shoulder before pushing him out the door. “Only the time Devon convinced you hotdogs were made out of real dogs.”

“Hey, I was six, and it wasn’t just any dogs, it was those wiener ones.”

Rolling his eyes, he led the way to the parking lot. “Whatever. Feed me.”

Within fifteen minutes they were sitting at the bar in Donovan’s. Jake’s brother had taken over the family business after their father died almost five years ago. Mike Donovan was tending bar while Ian’s god-daughter, Jennifer Mullins, was waitressing for the lunch crowd. When she had a free moment, she walked up behind Nick and gave him a big bear hug. “Hey, Nicky. We missed you.”

While she called Ian and his teammates “uncle,” Nick was only five years older than her, so she didn’t use the title with him. He knew she’d had a crush on him for a few weeks when she was in junior high, but that’d changed after some kid named Ryan had transferred into her school and caught her eye. He squeezed her hands where they lay clasped on his chest. “Hey Baby-girl. How’s my favorite blonde-haired, blue-eyed girl?”

In the mirror behind the bar, he saw her eyes roll. “Yeah, right. I’m sure you have blue-eyed blondes throwing themselves at you left and right.”

He chuckled. “I’m not denying it, but none of them can hold a candle to you.”

“You’re so sweet.” Grinning, she ruffled his hair before stepping away and heading toward the kitchen.

“Today’s burger looks good.” Ian handed him a “Daily Specials” menu. “So, where did Jake run off to? I figured he would’ve come to lunch with us.”

Instead of looking at him, Nick lifted his gaze to the basketball game on the TV above the bottles of booze behind the bar. Who was playing, he had no idea as he shrugged. “Didn’t ask. He just dropped me off and said he had things to do.” Hell, the fucking bastard hadn’t even told him that much.

Mike approached them from the other end of the bar. “Hey, Nick. I forgot you were coming in for a visit. What can I get you?” Not needing to know Ian’s order, he slid a bottle of Bud Light in the man’s direction and then grabbed another when Nick said he’d have the same. “How long you in for this time? I only got to see you the night of the bachelor party and at the wedding last time.”

He took a much-needed swig from the ice-cold bottle and swallowed. Damn, it tastes good. “I’ve got a month’s leave before I have to report back for some new equipment training. I’ll be here for most of it, but might be heading up to Mom and Dad’s for a few days after Thanksgiving. Playing it by ear.”

Chuck and Marie Sawyer still lived in the boys’ hometown of Charlotte, North Carolina, but had several residences up and down the east coast, and one in San Diego near Nick’s condo. Their dad was a self-made, real estate mogul, but did a lot of traveling and charity work with their mom, a plastic surgeon, while the company board ran things during his absence. While the boys had plenty of luxuries most kids their age didn’t have while growing up, their parents made sure they worked to earn everything they got. Each one of them had a trust fund in their names which they gained full access to at age thirty, but received a small monthly dividend from the fund to help with bare-bones expenses until then. Anything they wanted beyond that had to come from a paycheck. They’d all been earning their own money since they were old enough to work. And each one of them had gone into the Navy, with the exception of John. The second youngest of four boys, John had plans to enter the military almost nineteen years ago, but it never happened. A closet alcoholic, he’d died at the age of eighteen after several hours of binge drinking.

While Mike took their lunch orders and entered them into the computer behind the bar, the two brothers settled in to watch the game. Nick did his best to force Jake from his mind. He’d deal with him later. And he wasn’t letting the bastard run next time.