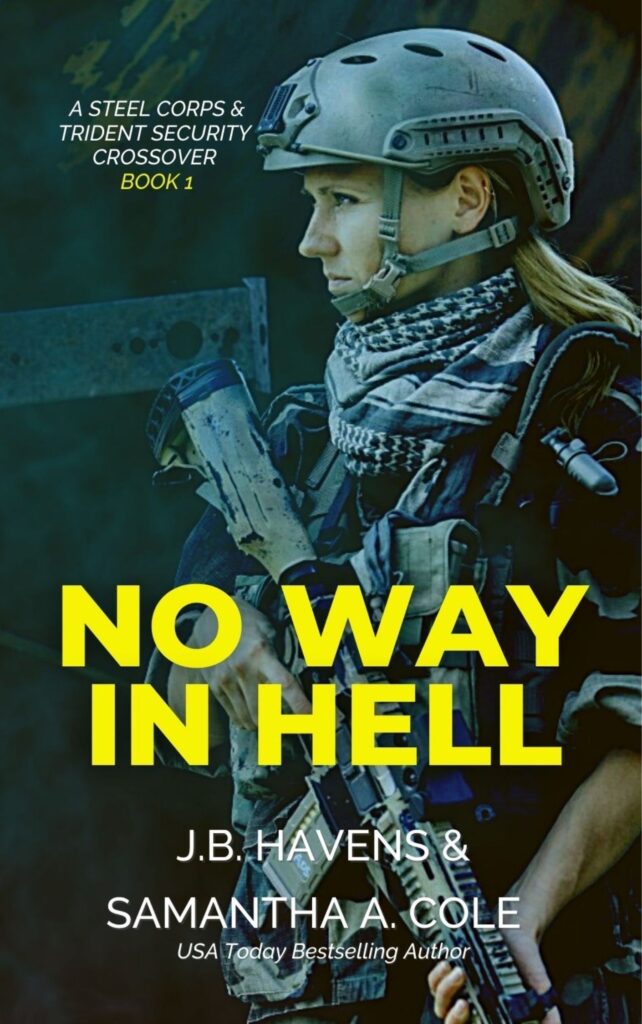 What do they have in common? They all do Uncle Sam’s dirty work.

How did they get started and how did their paths cross? Find out as they prepare to join forces to take down a domestic terrorist organization with one goal in mind—to destroy what these men and one woman will fight to the death to protect—life, liberty, and the pursuit of happiness.

No Way in Hell is a two-part crossover novel uniting J.B. Haven’s Steel Corps Series and Samantha A. Cole’s Trident Security Series. While reading both series is not necessary prior to reading No Way in Hell, it is recommended for optimum enjoyment.

Carter watched as the skinhead recruits ran the obstacle course. He’d been under for a few months now, and it was almost scary how well the organization was militarized. His solid cover had him fitting in perfectly with Colonel Michael Strauss and the other leaders of this sect of the New Order. As far as they knew, he was Timothy Carter, a Marine who’d gotten a dishonorable discharge, was court-marshaled, and did three years in the military prison in Leavenworth, Kansas. All for punching a black superior officer several times in the face. When Strauss had asked him about it, his response had been he’d gotten tired of taking orders from someone who wasn’t fit to tie his boots. That fake history, plus not having any obligations tying him down, was exactly the type of recruit they looked for here—in addition to being the right color to fit into Hitler’s ideal race. The First Sergeant ranking on his fictional military file, and his alpha leadership ability had fast-tracked him to Strauss’s inner circle. Now, he just had to wait until they moved to South Dakota and met up with the other two US divisions.

When the last recruit of the twelve-man squad he’d been put in charge of crossed the finish line, Carter barked, “Move out to the shooting range! You’ve got four minutes to get there and break down your weapons for inspection! Move your asses!”

As the men took off, Strauss approached him. “Lieutenant.”

He snapped to attention even though it grated on him. “Yes, sir!”

“At ease. How are the new recruits doing?”

Spreading his legs shoulder-width apart, he placed his hands at the small of his back. “They need some work, but nothing that a few weeks of training can’t fix.”

Strauss nodded. He was about three inches shorter than Carter’s six-foot-four frame and a little stockier. Like most of the men at the compound, his blond hair was closely cropped. A faint scar bisected his forehead—it had probably been from his youth and had required numerous stitches to close. “Well, try to shorten that time frame as much as possible. In ten days we’re packing up and heading to the main compound in South Dakota. General Wexler wants everyone training together to get ready for the big day.”

“You’ve mentioned this big day before, sir, but I still have no idea what you’re referring to.”

Pausing, Strauss studied him carefully with hard, pale blue eyes. “You’ll find out when I think you deserve to find out, Lieutenant. For now, all you have to do is follow your orders.”

The man turned on his heel and headed back to the main house on the compound. Mentally counting down from ten, Carter got himself under control, when what he really wanted to do was slit the bastard’s throat—he could almost feel the fucker’s hot blood spilling over his hands. The only things stopping him were it would blow his cover and the mission, and karma was a real bitch—Strauss would get what was coming to him in due time.

Jogging toward the shooting range, he thought about how to bring Mic and Phillips into a conversation with Strauss at some point. He’d already established he had wandered all over the United States since his release from prison. The planned cover story for Staff Sergeant Bea “Mic” Michaels and Sergeant Gary Phillips, aka Mikayla and Phillip Robins, was that they were redneck half siblings from Aberdeen, South Dakota. Purportedly, Carter had met Mikayla during his travels, and she and her half brother had the same warped hatred for the US government, so they were ideal people to bring in.

Another squad of recruits ran past him in sloppy military formation. There were a total of fifty-eight men and six women occupying the compound. Training consisted of standard boot camp drills and weapons exercises. The arsenal at this compound alone could be used to take down hundreds of people at a football stadium within minutes—and that didn’t include the explosives in an ordinance bunker on the far side of the property. If the other two training facilities were equally equipped, then the casualties on the “big day” could rival the numbers from 9/11. And he’d be damned if he didn’t do everything he could to make sure it never happened.