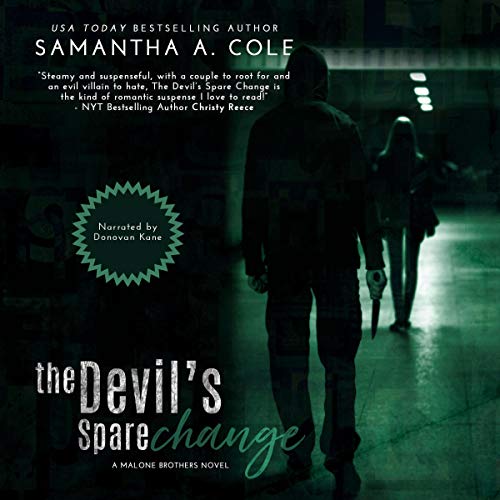 FBI agent Sean Malone’s homecoming is interrupted by two things—a pleasant surprise from his youth and a deranged serial killer.

The little tomboy who’d followed him and his brothers around is now grown up and drop-dead gorgeous, and he finds himself thinking about her in ways he’d never done before.

Whisper, North Carolina, where she’d spent her childhood summers, is the perfect place for Grace Whitman to open her new business—especially when she finds her adolescent crush has returned as well.

As the two get to know each other all over again, local law enforcement asks Sean to help find the man who has tortured and killed three women. Will the killer follow his pattern and move on, or has Dare County become his permanent hunting ground?

The dance floor vibrated with the deafening beat filling the bar. As usual, the nightclub was packed—Saturday night was party night after all. In tandem with the music, strobe lights pierced the dimly lit room and bounced off the gyrating bodies on the dance floor. The black walls and red accents throughout Visions, the hottest dance club in the area, made it feel more like Sin City. Some of the occupants were just out for a good time, while others were looking for someone to hook up with for either short- or long-term companionship. And for at least one person, it was something more. It was the perfect place and time for hunting. Glancing around, he looked for his prey. She was here somewhere, he thought, and hopefully, it wouldn’t take too long to find her. Tingling with anticipation, he could feel his groin tightening. Hmm, who was the lucky lady tonight?

He turned and couldn’t believe his luck. He didn’t have to find her; she had found him. Her blonde hair was teased high and her face heavily painted with makeup. Trashy—just what he was looking for. She was a little older than the women he usually went for, but with her curvy body poured into that tight, red dress, he could forgive her age.

“Slut,” he murmured under his breath before smiling and addressing her in the heavy Southern drawl he used while hunting, “Sure, darlin’. Order what you want, it’s on me.”

The woman giggled and asked the female bartender for a whiskey, neat. The man threw a twenty on the bar but avoided making contact with the woman behind it. The staff was so busy he doubted anyone would remember him, but it was always best to take precautions.

“My name’s John,” he lied loudly into his target’s ear. “What’s yours?”

“Dafffne,” she slurred before down the whiskey in one shot.

Good, he thought with giddy eagerness; Daphne was already nice and wasted. Easy pickings. He had a flash of disappointment—she was almost too easy. Maybe next time he would look for someone more challenging, but for tonight she would do. Who was he to look a gift horse in the mouth? Or in this case, the gift whore.

After signaling for the bartender to refill the glass as he threw a few more bills on the dark, oak bar, he picked up the new shot of whiskey and handed it to the slut. “Well, this just happens to be your lucky night, my lovely Daphne.”

She tossed the honey-brown liquor down her throat and giggled even louder this time. Placing her hand on his chest, she took a step closer to him. “Why’s that, babe?”

“Because you met me, that’s why. What do you say we blow this place and go have ourselves a private party?”

“What’d you haf in mind,” The whiskey was doing its job faster than he expected. She had gone from seductive to sloshed in under fifteen seconds.

Taking a clear plastic bag from his pocket, he discreetly swung it in front of her glazed eyes until she finally focused on the tiny white pills it contained. “Oh, Johnny, you read my mind,” she purred.

“Well, come on then.” He nodded toward the rear door of the club.

Looking over her shoulder, she hesitated for a brief moment. “I shhhould let my frens know I’mmm leavin’.”

Her tongue was getting thicker by the minute. If he didn’t get her out of here soon, he’d have to carry her out, and people would definitely notice and remember that. “You’ll never find them in this crowd. Come on, baby, I’ll have you back in an hour . . . tops.”

She seemed to consider it for a moment and her gaze dropped to the bag he still held in the palm of his hand. Her body swayed toward him and he grabbed her around the waist to prevent her from falling. “Are you shursh?”

The corners of his mouth turned up in a knowing grin. “Positive. You can trust me.” With that, he led her out the back exit, quietly humming “Luck Be a Lady” by Frank Sinatra to himself.

Three hours later, as the bar was closing, her friends began bitching about Daphne and how she hadn’t even told them she was leaving. They were just glad she wasn’t their ride home.

“Steamy and suspenseful, with a couple to root for and an evil villain to hate, The Devil’s Spare Change is the kind of romantic suspense I love to read!”—NYT Bestselling Author Christy Reece

Other Books in Malone Brothers Series